Ahhh, GRIP. A spiritual successor to Rollcage with much promise, but it does seem to make the oddest mis-steps sometimes. Nonetheless, I will begin by saying that the GRIP team are slowly, but surely, pushing the game to better heights, and I highly respect the fact that they aren’t going to be taking the game out of Early Access until they’re sure it’s good enough. Even with critics like me pushing, and occasionally moaning and bitching. 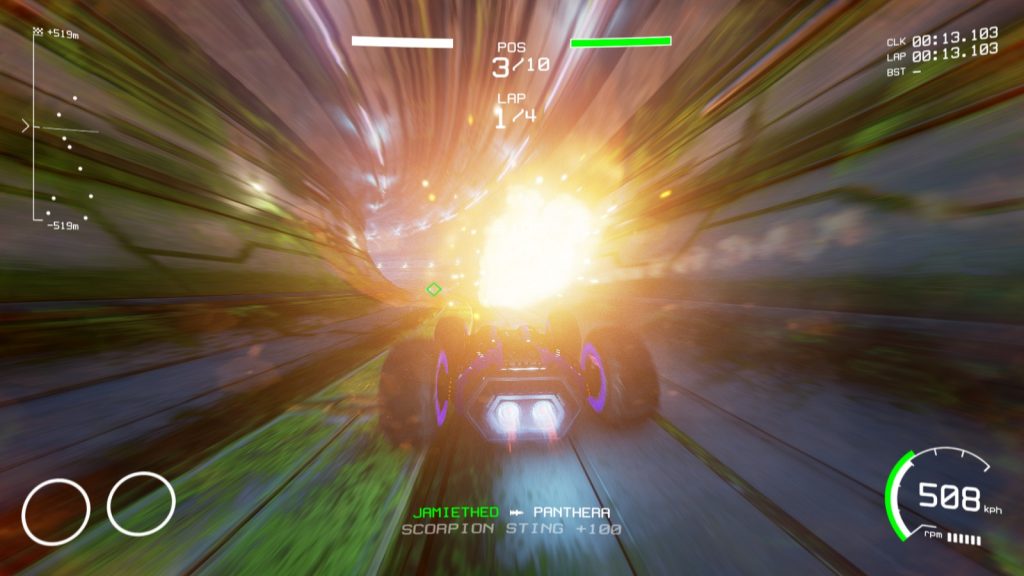 Pleasure, thy name is a missile up the jacksie of the racer in front.

Needless to say, there is going to be some moaning and bitching. But less than there was, and in different areas. So let’s start off with what’s good, and what’s improved.

Aesthetically, apart from something I’m going to touch on a little later, GRIP is good. Gritty industrial elements counterpoint well with pretty vistas, blend well into the landscapes they’re built on (Except where it’s obvious they’re the paving over of said landscapes with ugly metal), and similarly, the soundtrack is pumping, industrial, and decidedly cool. The various GRIP vehicles stilll have character, despite the constraint that they have to be boxy, and their wheels big enough to fit the main motif of the game (They have high downforce, so it doesn’t matter which way up they are) , and that the steering becomes less responsive the faster you go, so slowing down is important is good. Similarly, the new weapons appear cool, and my previous complaints about the blue-shell nature of the Assassin missile appear to have been dealt with somewhat. The AI appears to be somewhat less vicious, and this, too, is good (I spent all of the last session on Hard, and felt like I was earning my podium place without feeling cheated on all of the tracks I was familiar with.) 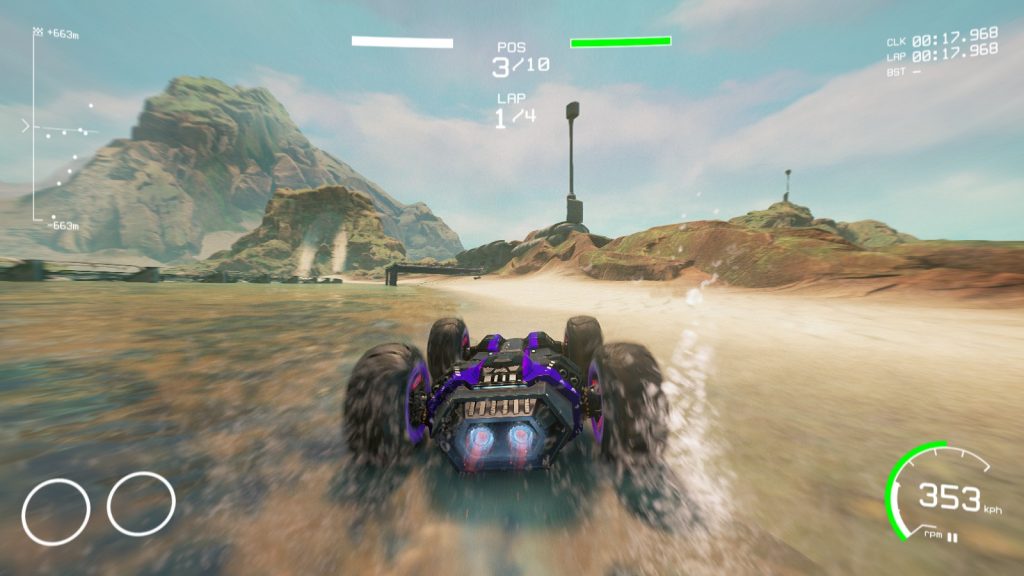 Atoll is *very* lovely, as is the wont of a sandy beach…

So far, so good. Equally good, it’s still early days, and the devs do have a quick response to considered critique. Cool. Now for what is currently less good, or needs some work. Starting with the dramacam, and signposting. Essentially, a bit of colourblind support, or making signage and the path more clear, would be very helpful in the WIP tracks, as the game has now started putting in tracks with some devilish features, and more attention to the signposting thereof would be very helpful indeed. Features like uphill to downhill U-turns, and quite sharp ones too on Atoll, or the 90 degree turn with little warning and no rails on the fittingly named Acrophobia track. Combining with this was the drama cam, which, when I have a sharp impact, or I’m moving very slowly, decides not to focus on where I’m going, but… Well, this screenshot from Atoll is emblematic of the sort of thing I have to deal with, and I will also add the disclaimer that, most of the time, it works, and adds all sorts of dutch angles and funtimes that make the experience quite visceral, working well when I suddenly have to flip between track elements. Finally, the Primer is quite intrusive, and I find myself heavily disagreeing with the decision that either the game pauses, or heavily slows down (while still requiring control) every time it wants to take up the screen to tell me what to do… Especially as, if I’m not quick enough, it’ll do it again until I’ve done the arbitrary goal that, in 90% of the Primer, is “Use this basic weapon on somebody” if I’m not quick enough to do so. 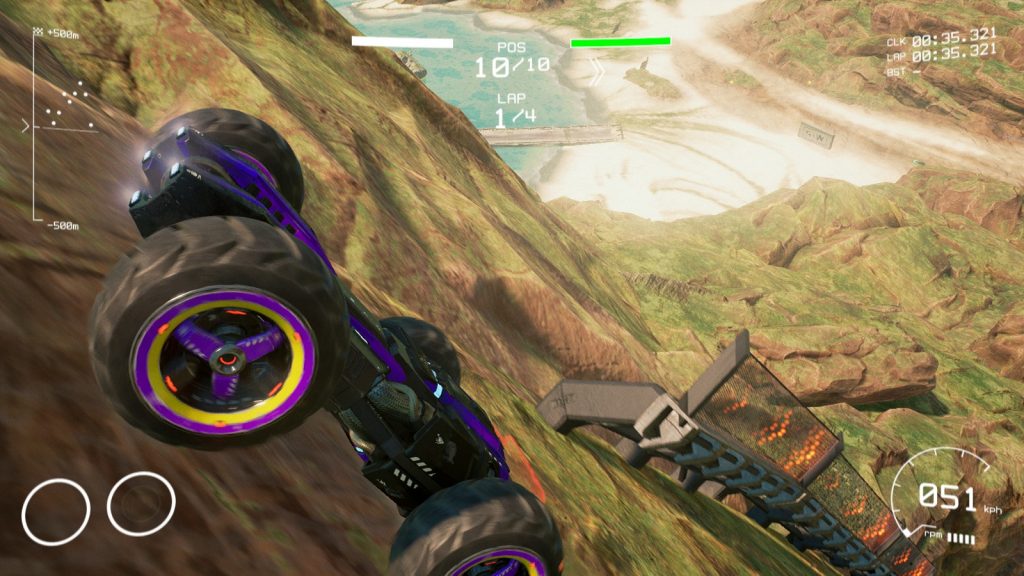 …Alas, it is also one of the places where DramaCam hampered me more than pleasured me. Yes, I am aware the beach is pretty… But the way forward is IN FRONT OF ME.

Overall, though, GRIP definitely looks like it’s improving, the addition of multiplayer is nice (Still in testing, and the game, as with all WIP content, politely informs me is WIP both in menu and game, and, in the case of Multiplayer, embargoed until it’s more polished. Which is perfectly fine), and I feel a lot better about recommending this to future racing fans who still want some wheels.