Ahhh, the dungeon management genre, how I love it so. Defeating those righteous do-gooders with the promise of treasure, and maybe even a fellow dungeon owner that doesn’t agree with my platform of Mine, Mine, Mine. Which makes Dungeon Manager ZV 1 and 2 somewhat interesting, as the two games take very different approaches to, effectively, the same subject.

One problem for a reviewer is that it can sometimes be hard to get timing down. For example, there *was* a King Slime, and a powerful one, in that middle square. There isn’t now. And soon, those red dots will reach my boss. Dammit.

Dungeon Manager Zombie Vital Edition (to use its full name) hit the Western world in October 2015 (It had originally been developed in 2004), and… Well, it’s a game where the options expand as you play, but you’d be forgiven, for playing the game for an hour or two, to think that there was little beyond building rooms, watching heroes come in, and then they go and do whatever the heck they want, occasionally dying, occasionally leaving, and always, always aiming for the final treasure in your dungeon and the death of your boss monsters. If the last treasure in the dungeon goes, whoops, you’ve lost.

Thing is, there’s actually a lot more that can be done than the first, near-surface level game implies, and here comes both the draw and the problem of DMZV in general: Because it isn’t terribly clear at times, you’ll make mistakes on your first run, mistakes you won’t always be able to correct, and won’t always be made clear as mistakes until hours later, when the Big Boys of herodom come and play. Although there are multiple saves, that’s a lot of either work or faffing around that’s going down the drain. 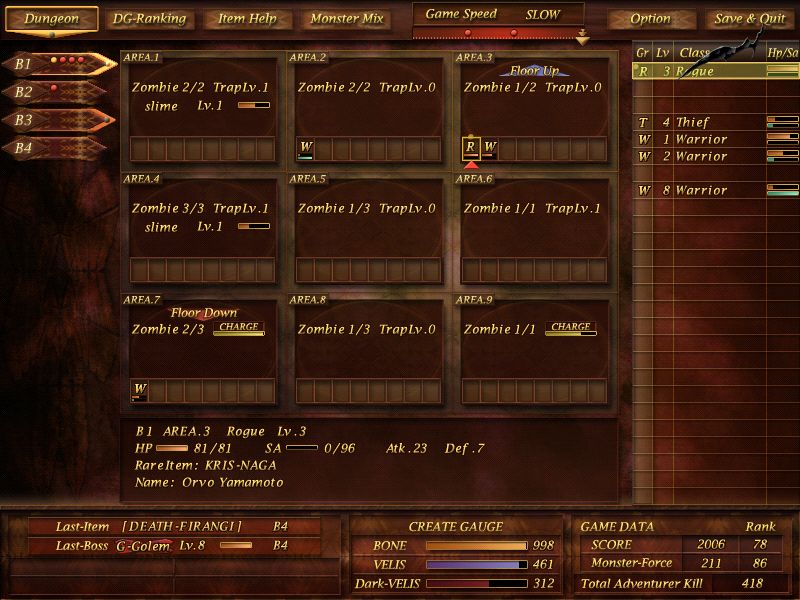 This is a very un-optimal first level. Although, to be fair, those two slimes are the only two to have survived past heroes achieving level 3 to date.

Equally, there is an optimal play considering you always have a 3×3 grid to play with on each floor, and any room connects with every other adjacent room: One long path filled with your heavier monsters, nastier traps, and the like… And one, very short path, filled only with monsters beneath the notice of the groups you encounter, leading straight to your final boss. And you have to make it clear the difference in difficulty from the first room, as groups only judge where to go by adjacent rooms. The more heroes you kill, the more you let some vital few escape to tell the tale (having been satisfied by murdering some of yours, or defeating your traps… All the better to lure bigger, better heroes in), the more you can do. At first, it’s only traps, capped at the dungeon level you’re in, and some simple monsters. But once those monsters level up, you can merge them, making new, nastier monsters. You can change the elements of floors, giving advantage to certain types. You find Dragon Eggs. And, of course, treasures can change things up too.

Unfortunately for DMZV1, there is somewhat of a flaw: Very quickly, certain monsters are outpaced, so it becomes tougher to level them up so you can get them to be able to meld with other monsters. Also, time will proceed unless you’re holding down the CTRL key or have set it to Freeze, so keeping track of everything, even on slow, can become a slog. As such, while DMZV1 is interesting, it’s also a deeply, deeply unfriendly game. 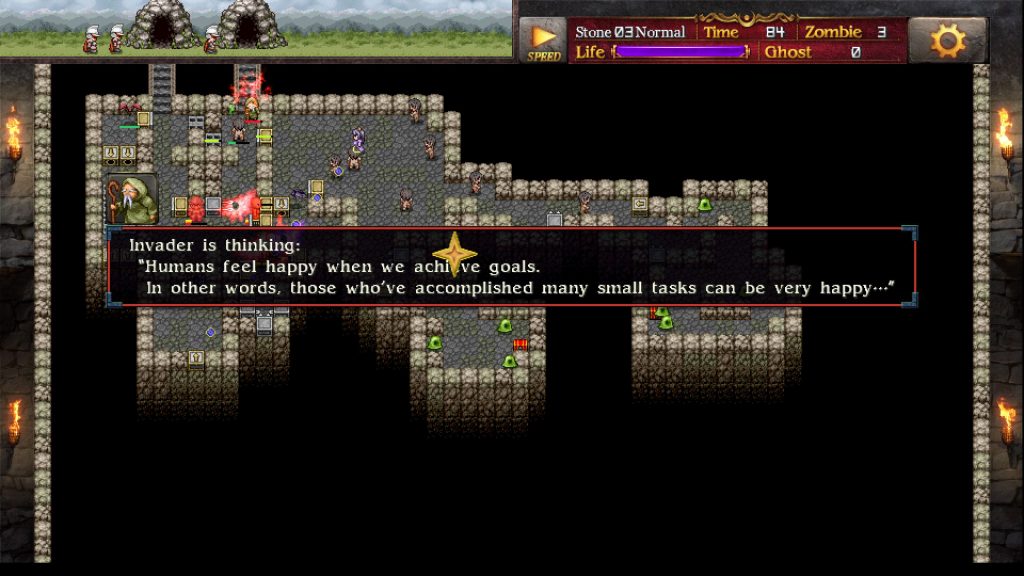 Ah, how right you are, random Dungeon Invader. [finishes another review, sits back with a smile]

DMZV2, on the other hand, changes the formula. It’s still, at its heart, a tower defense game, but now it has puzzle elements, sprites and tiles, and a friendlier interface. The general idea is still the same: Monsters, it seems, are getting a lot of stick, and the Lord of Dungeons is beseeched to create a dungeon so deadly, so alluring, that it will bring even the king of the land to it, to be murdered horrribly as vengeance for all those cute slimes being murdered. Dungeon features are unlocked in a main campaign mode consisting of, well, puzzles. How do we stop the adventurers from taking the objective in the time allotted to us? With fireballs, traps, and a succubus who is not terribly good at hand to hand, but can summon zombies (Remember, the ZV stands for Zombie Vital!), and shoot rather nasty magic, so long as the ghostly power of heroes who were satisfied until we killed them horribly lasts out (Obviously, we get that ghostly power by satisfying their needs, then murdering them horribly before they can leave. Priorities, folks, priorities!)

It is, so far, my favourite of the series, because, although the unlocking of features to use in the Create A Dungeon mode is through the campaign, that extension of DMZV1 and Resurrection’s “You get more things to play with the more you play”, it has selectable difficulty (indeed, Easy is mandatory the first time), the ability to go back, and the sound and visuals are less straining on a nice long game. It’s also, to my mind, the most characterful of the three, with at least some heroes introducing themselves, the sprites having their own character, and, sometimes, the black humour in levels. One of the early easy levels has you doing… Well, exactly nothing. The dungeon’s set up pretty much perfectly, and it harms your ability to murder folks to interfere with a trap setup that catapults heroes in laps round the dungeon until they die from impact damage. 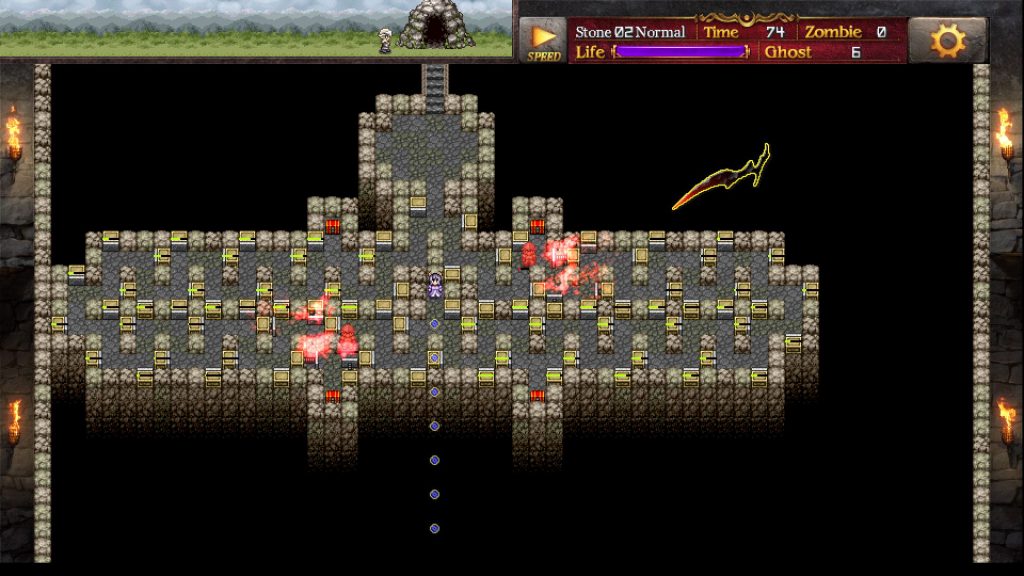 Finally, to my knowledge, this is the only game in the series with an expansion, released earlier this year. A fairly cheap one, too, with extra puzzle dungeons, 10 extra items, and second sets of transformations of monsters into better, nastier forms for, around £3. In fact, both of the first games and the expansion comes to just over £13 for all three in a bundle. It’s pretty reasonable, although DMZV1 and the newly released (and separately reviewed) Resurrection both involve making mistakes that you may not notice for an hour or two. Try them out if you like to see interesting experiments with dungeon management games.

Dungeon Manager Zombie Vital 1 is available on Steam here, and DMZV2 here. Both pages have a link to the bundle.