Source: Review Copy
Price: £14.99
Where To Get It: Steam
Other Reviews: Release 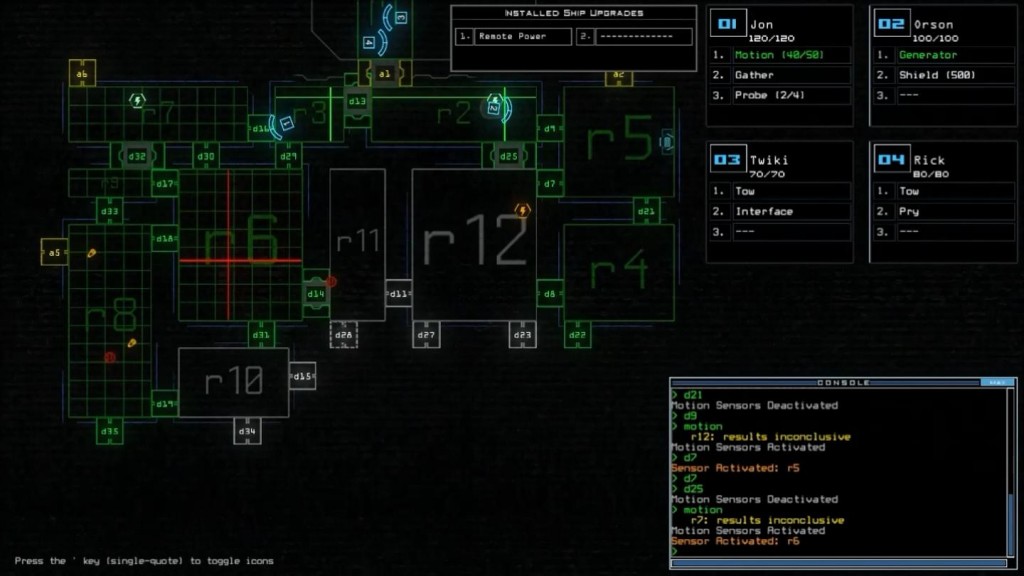 But such is the life of the average salvager in Duskers, an intriguing game by Misfits Attic (Who you may remember for devilish action puzzler A Virus Named Tom) that nonetheless makes me hate my big ol’ ham hands. Because it involves text commands. In real time.

Duskers has apparently been in Early Access since early August, and it’s relatively easy to describe: You bimble around a procedurally generated universe absolutely chock full of dead, not-so-dead, and very much alive and dangerous shipwrecks, sending little drones to try and explore, survive, and salvage, despite a variety of threats. Including the fact that you can only directly control one drone at a time, and have to do quite a few things with typed console commands.

In a way, it’s similar to Deadnaut, in that you’re never going to have the full information, you’re often under equipped, and the threats ramp up quite quickly. Thankfully, just as Deadnaut has recently added difficulty options, Duskers has them also, allowing you to turn off certain threats, such as radiation, which, as you’d guess, makes rooms basically uninhabitable, and tends to spread, or vents. If you don’t get where the threat from an open vent is, you haven’t seen or read enough horror. I like that. 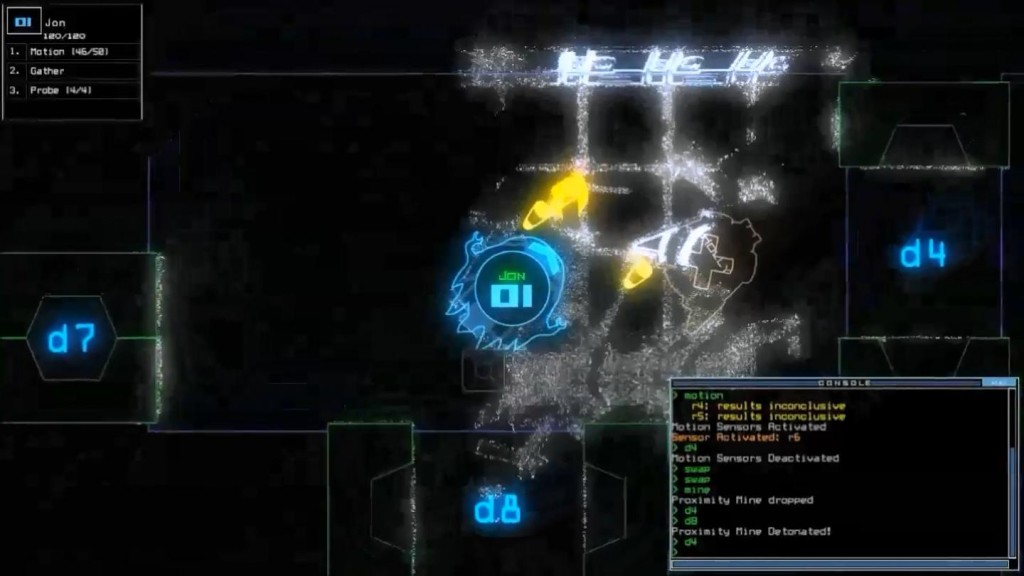 Others have come before, leaving their drones to be salvaged by us. Problem is, the things that destroyed them are very often still around.

What I’m not so sure about is the input scheme. Which is awkward, because it’s clear this is the core of the game. Without the quicker enemies, the radiation, and vents, the game is almost like a realtime puzzle. Generators only power certain parts of each ship or station you visit, doors may or may not work, and the slower threats are a case of “Spot, back away, work out how to lead them away from where you want to work.”

But, even with a useful autocomplete, you’re not always going to react quickly enough. As an example, there’s nothing that shares the ‘tu’ of turrets, so ‘tu [enter]’ is usually enough, but that “Not always” can be somewhat frustrating, rather than the challenging I think Misfits Attic are aiming for. Still, in the majority of runs I’ve had so far, I’ve at least been able to make a start on objectives the game offers, and I’m kind of impressed by other aspects of the game. For example, for something roughly 28% done, there’s that complexity from simple rules that I adore in many games. Let’s meet a few Drones and Ships, and give you some examples.

Toby is a sturdy wheeled ROV. He’s not very fast, but he can take a whalloping, and that’s not surprising, considering he’s my tow truck, for recovering ship upgrades, disabled (But not destroyed) drones, and other important features that are too big for my Gatherer to handle. But he’s by no means defenseless. See, Toby recently found a Trap module… Four anti-vehicular shaped charges with remote detonators. Well, to the victor go the spoils, said I, and he’s been a valuable member of the team ever since I worked out the blast radius of my explosive surprises. It’s a little irritating to time things properly on typing “trap boom”, then hitting enter, but I think I’ve gotten the hang of things, and Toby rarely fails. 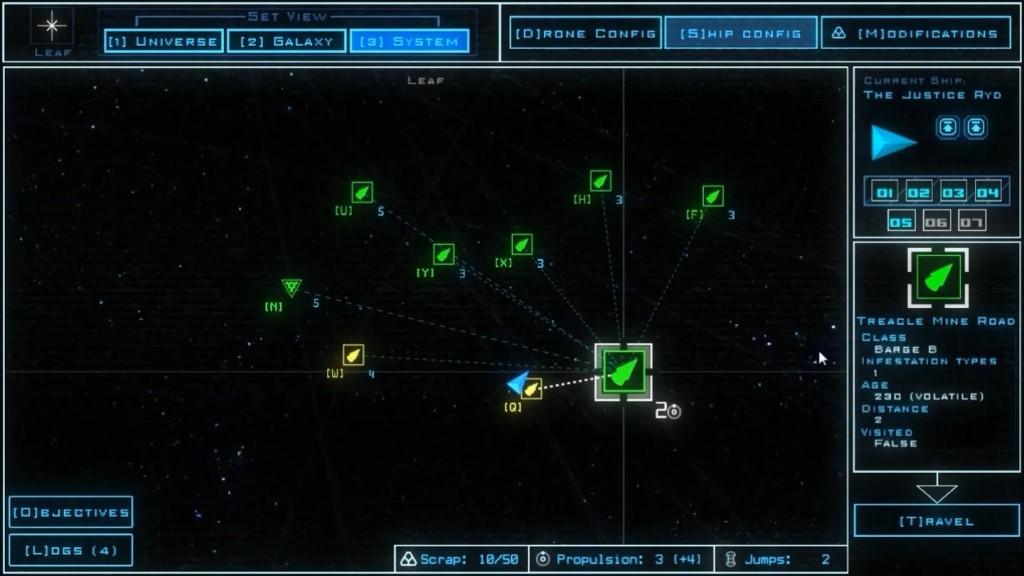 I currently haven’t needed to press 1. Yet. But the fact it’s in there is slightly intimidating.

Jane, meanwhile, is a somewhat plainer model. Her specialty is smaller material and fuel for my ship. So, she’s plain, but indispensable. Even more so now that she can detect motion in adjacent rooms. It’s not perfect, as some rooms are shielded, but she often lets me know ahead of time if something nasty’s hiding in the next room. Considering that, two games out of three, her compatriots failed to have motion sensors, I’m happy.

Finally, there’s Vinnie. Vinnie’s not tough, despite a common association of the name Vinnie with grim jawed tough folks, but he’s useful, as he’s got a portable power interface. He’s the only one who can turn generators on and off, and without Vinnie, I’d probably be in serious trouble. He got a stealth module, which means he can hide in (relatively) plain sight for enough time to get him out of danger… So long as I have the scrap to keep his stealth module in good nick.

Meanwhile, my ship, the Maria Asumpta (A grand old lady) has survived long enough to pick up a pair of modules herself. The first is a Power Rerouter, allowing me to shift which rooms and their doors are powered through linked generators. It saves a lot of time, and keeps Vinnie safer. Meanwhile, a Long Range Scanner, while almost on the verge of breakage (And deteriorating as it goes) allows me to more comprehensively scan my local area, opening up more options for travel. 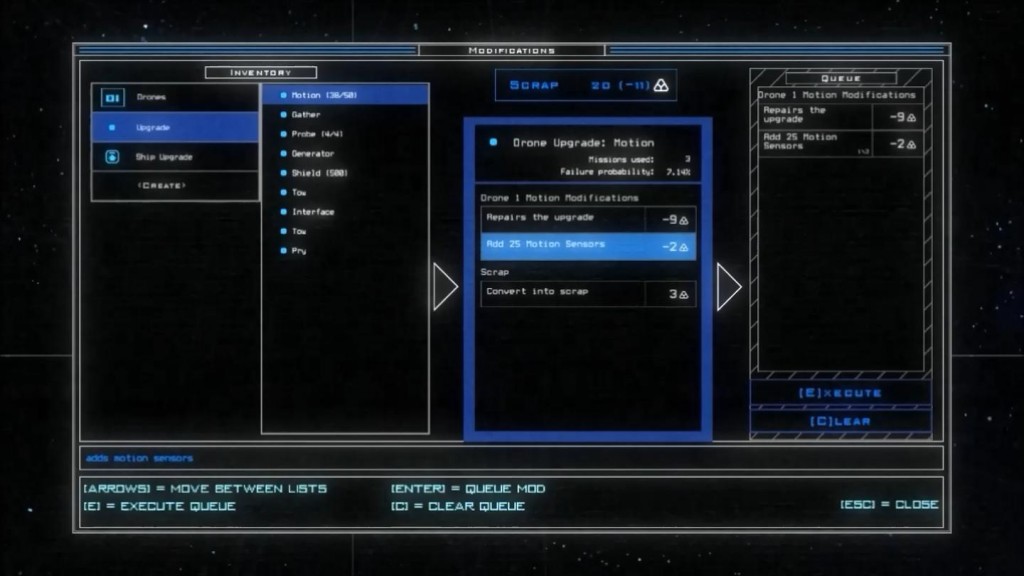 You will, it’s almost guaranteed, never have enough scrap to fix everything. Prioritisation is important.

Of course, since this could be called a Roguelike, resource scarcity and degradation of equipment are a distinct problem. I need scrap to repair and upgrade… Well, pretty much everything. I need fuel to explore my surroundings, and jump-core rods to properly get around. Meanwhile, apart from the whirr of my drones’ motors, all is deadly quiet. A little too quiet, sometimes.

But it’s still early days yet, it’s definitely interesting, and if you liked Deadnaut, you should give this a go. It’s got similar replayability, a somewhat interesting premise, and the game is clearly designed around its atmosphere and aesthetic. But be aware that quick and correct typing is important for play, so you may need to tone down the difficulty if, like me, you have clumsy typing fingers.

There are two supporting videos here. The first is the Halloween update vid, with a somewhat amusing stunt Misfits Attic pulled (Real-life Duskers), and the second is one of my run-throughs of a game, showing what I can. (Part 1 , Part 2)

The Mad Welshman glared at his nemesis, the keyboard. Tiny buttons… Big fingers. He was all alone in the universe, and the only tool for survival was his command line skills.

…Needless to say, he was somewhat tense.