The Dungeon Manager series has had an odd place in both my mind and heart since I was first made aware of the first localised installment (Dungeon Manager: Zombie Vital Edition.) They are, undeniably, tower defence games in a sense, although, as you’ll see from the Going Back on DMZV and DMZV2, they’ve gone in a couple of different directions, and I kind of like them… But one thing I can’t deny is that I’m never sure if I’m playing it right. And that’s never a great feeling. 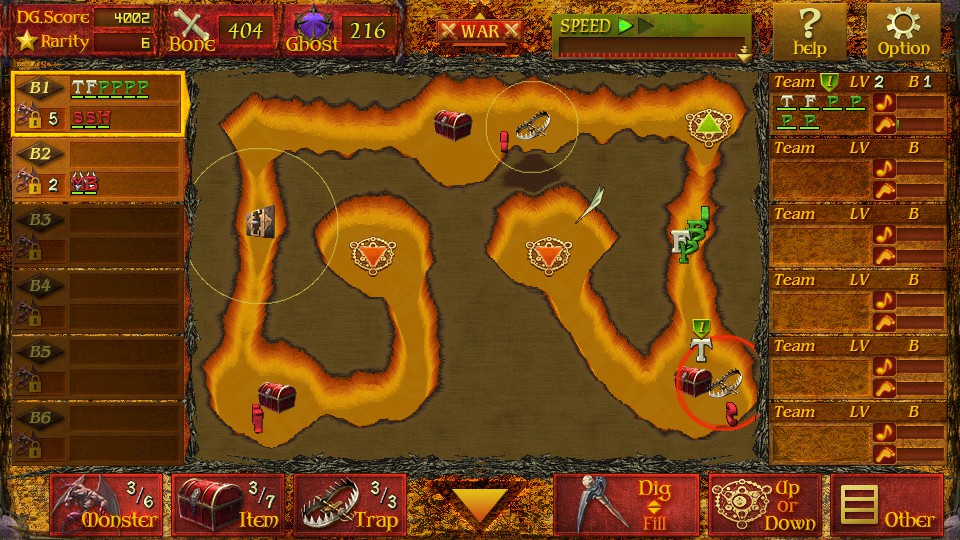 On the one hand, this is a fairly established dungeon. On the other, that’s a *big* group of adventurers.

In any case, the general idea is that you, the Dungeon Overlord, have become somewhat tired of those heroes killing monsterkind, again and again, so you’ve decided to make a dungeon. A dungeon that will grow, tempting greater and greater heroes inside to be given hopes, then slain, until finally, you destroy kings. So you dig out a dungeon (in this installment, by basically “painting” it with the mouse), place traps, enemies, and monsters (within set limits, and starting with only a limited toolset) , and then?

You wait. Heroes arrive periodically, and from there… Well, this is where the mileage begins to vary. See, the heroes and monsters alike move and attack in a fashion best described as “Bumblefucking.” They have some rough idea of the direction they’re heading, but seem to bump into walls, fumble their way around, and, in the case of monsters, suddenly shift priorities from someone they were sure to kill to someone who could (and does) easily murder them. And yet, despite all this, heroes will find their way to chests, they do find their way through the dungeon, and the monsters do manage to kill folks.

Killing them too early isn’t great, but it’s serviceable, as it still grants you bones with which to summon zombies and traps. Kill them after they’ve satisfied some of their needs (which, yes, includes killing your monsters), and you get Spirit, which can be used for slimes, building new kinds of traps, and other fun stuff along the way. Let them escape after satisfying their needs, and they talk up the dungeon, slowly increasing the fame of the dungeon, and the power of the heroes invading it. Playing through the tutorial once thankfully gives you the basic idea, and there are hints that give you further possiblities (Why not build an “easy” path to the boss monster(s) so low level characters can be easily fed to them, and a “hard” path so more experienced heroes get tempted away from that “easy” path?) 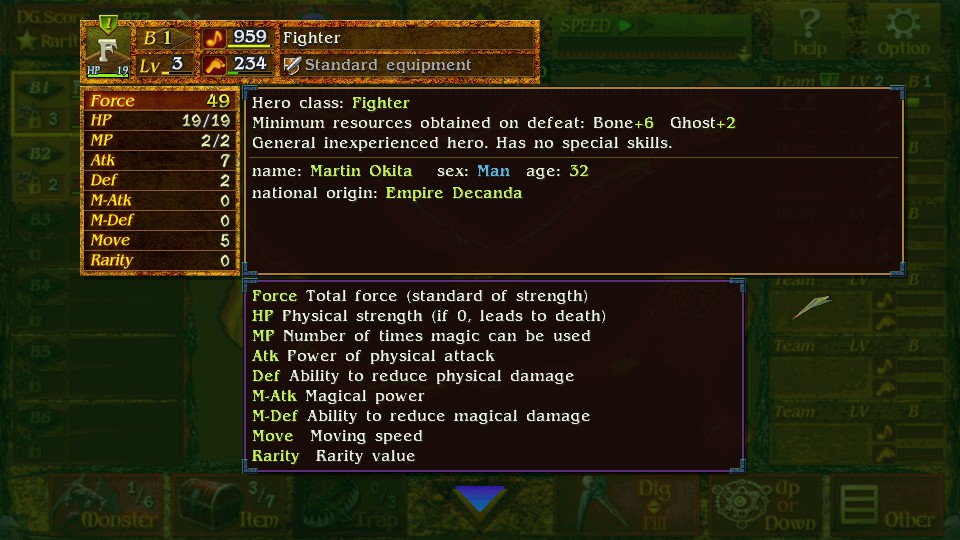 Clicking on an adventurer or monster’s icon can tell you more, and, in the case of the adventurers, there’s a world hinted at.

“But wait, doesn’t that mean eventually low level monsters eventually become useless?” Well, not quite. See, with Resurrection, the option now exists to invade the surface world, in a wave based monster on hero combat. At the price of temporarily and completely depopulating your dungeon afterwards, even level 1 zombies and slimes have at least a chance to level up and become the murderbeasts you need to progress. Oh, yeah, combining monsters of high level together gets you new monsters. Better monsters. Two zombies, for example, make a Half-Golem, while two of those become a Golem, a slime and a zombie becomes a Melty Zombie, and two of those becomes a Core Ghost, and two slimes becomes a Big Slime, and so on… There’s a fair few combinations, and due to the fact that monsters gain abilities in this game, they get a little nuance and character of their own.

Of course, all of this has been mechanical talk. How does it look? How does it sound? How does it feel? Well, this is where it gets a bit awkward. I don’t particularly feel invested in the dungeon building itself, the sound effects are okay (Although it’s easy to get tired of them), and there is a single music track in-game that is pumping, but like the sound effects, feels repetitive after a while. What I do feel invested in, on the other hand, is finding out what makes what. And, since this game appears harder to outright lose than the original Dungeon Manager, I can do that a little bit at a time. The game autosaves, with the options to clear the dungeon, but keep your monsters (Initialise Dungeon) or to just plain restart (Initialise Save… The localisation’s okay, but definitely not perfect.) 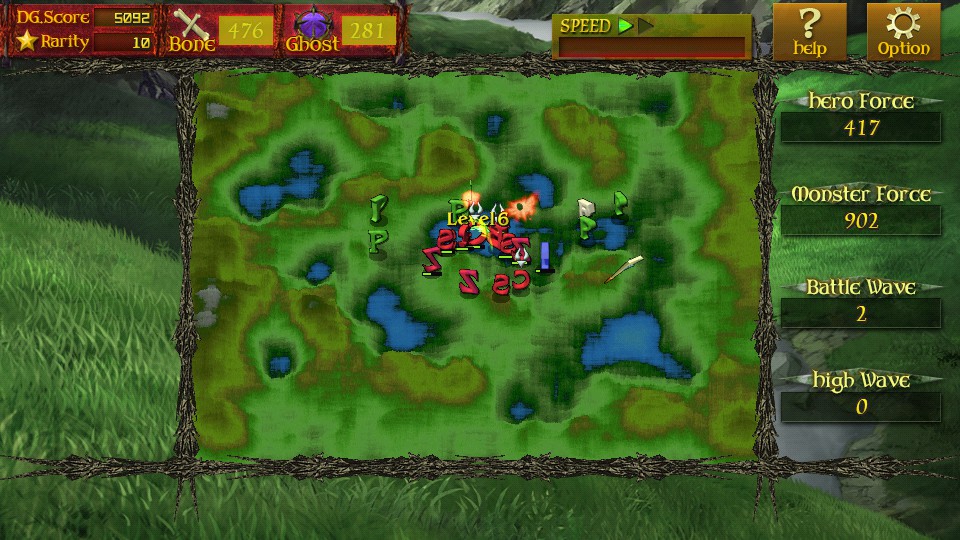 As with main dungeon mode, you have no control over the monsters’ actions. But it is fun to see adventurers getting overwhelmed!

It’s not a game that feels all that deep, although there are hidden complexities under the hood, and it’s certainly not going to be impressing anybody graphically (Although I was interested by the developer, Studio GIW, going back to letters, but in pseudo-3d, rather than the tile or sprite based monsters of the previous game.) My main recommendations, here, would be to fantasy game strategy fans who want to see something somewhat different, with no short-term pressure, and who are okay with the fact they’re going to be doing a fair amount of micromanagement even without having direct control of their dungeon denizens.

The Mad Welshman is, of course, a Dungeon Lord of some standing. Why, he’s run more than six dungeons, in six worlds, and none of his minions have ever filed a complaint!