Cultist Simulator is a little like occult research itself: It’s messy, and offputting and obfuscatory at first, but, as you get deeper, it all becomes simpler, and then… Well, you’re exploring for the sake of exploring, falling deep down the rabbit hole… 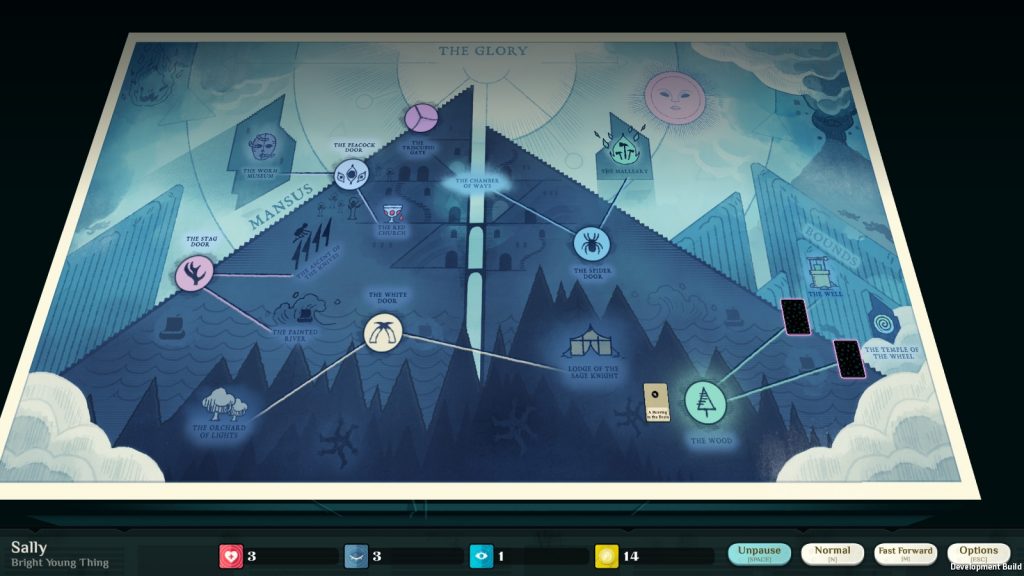 The Mansus, this game’s Dreamlands, in all its glory. *Poked from off camera* Oh, sorry, wrong capitalisation. All its Glory!

To unpack this, nominally, Cultist Simulator is a real-time strategy/RPG hybrid where you, a person of some description (be that a doctor, a policeman, a working joe, or other things) get a hint of a deeper world, a world where, if you really, really want, if you work hard, and make sacrifices, you too can become a big player in the world of ancient magics.

Of course… Some of those sacrifices are human, and some of that work is murder, or suppression of evidence that you’re doing all this stuff, and I say “nominally” regarding the game because it isn’t really much like anything that’s come before. The cards, for example, are all on timers. The events are on timers. And, while you can pause and interact with them all, unless you’re doing just that, the event cards can only be viewed individually, so you’re always going to miss things, partly because here, a lack of tutorialising is a deliberate choice. Fun fact: Cult, and occult are words whose Latin roots are two letters apart. Colere, to cultivate, and Celare, to hide.

As such, a review of Cultist Simulator, by its very definition, is a somewhat spoilery experience. Starting only from a card or two, the world expands, with more verbs (that’s the squares as opposed to the cards) unlocking in play, more threats, more opportunities. Teachers are discovered, lore is uncovered. Dreams, strange places, possible cult members, and, of course… Hunters. People who would rather (and with good reason) see these ancient secrets remain buried, even if their methods, their name (The Bureau of Suppression) seems a step too far. 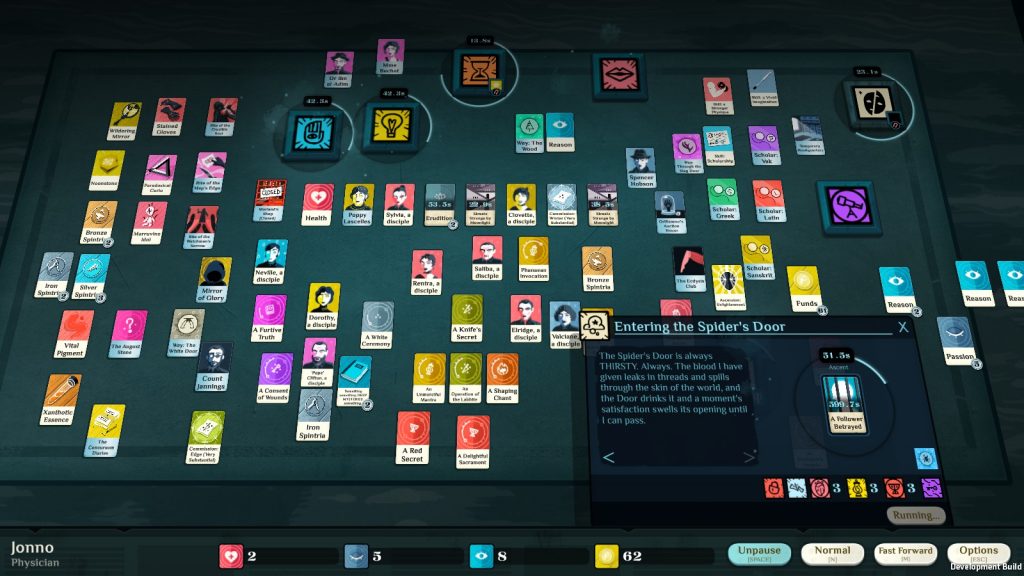 There’s one heck of a narrative here, but interpreting it is as much a learned skill as getting to the point I have.

This is one of the high points of the game, that the world expands, and is explained as you go, in fragments, little pieces. With atmospheric writing, overlays to the board, changes of music, the world is created. This is a game with a lot of reading, and a lot that can only be discovered through experimentation. Wait, you can Study with your Patrons? Damn, didn’t know that. You can get a rough idea of what an event or card wants by clicking the empty slot? Damn, didn’t know that at first.

It’s simultaneously frustrating as hell, and some excellent marrying of narrative to mechanics. You are, after all, always a character unfamiliar with the occult elements of its world, by choice or no, but, as a player, I can’t deny I spent some time angry that progression seemed always a step away. What the hell do I do with this door? How do I deal with the deep, dark Dread in my life? (To be fair, that’s a question I struggle answering in life, as well as this game.) It doesn’t necessarily help that yes, even if you’re so close to earning that goal, that true glimpse that destroys and creates, something simple, something you’d overlooked, can prematurely end your dreams. Since a single run can sometimes last up to 10 hours, you can imagine why that’s so devastating. The cult members and patrons remain the same, even if the story changes, and this, also, is perhaps a flaw.

Cultist Simulator is interesting as all get out, and somewhat unique, both in terms of how it handles events, and how it uses a lack of tutorialising to its benefit narratively. I would recommend it to folks, because, interestingly, it’s using its flaws. Not perfectly, and there are still things that the game does that annoys the hell out of me (such as generating cards on top of other cards, or the magnet slots on events prioritising over events that are already being used, dammit dammit dammit, but it intrigues me with its well researched and written world, its subtle, mostly minimalist aesthetic, and… Not gonna lie, it feels good when you finally achieve your goals. 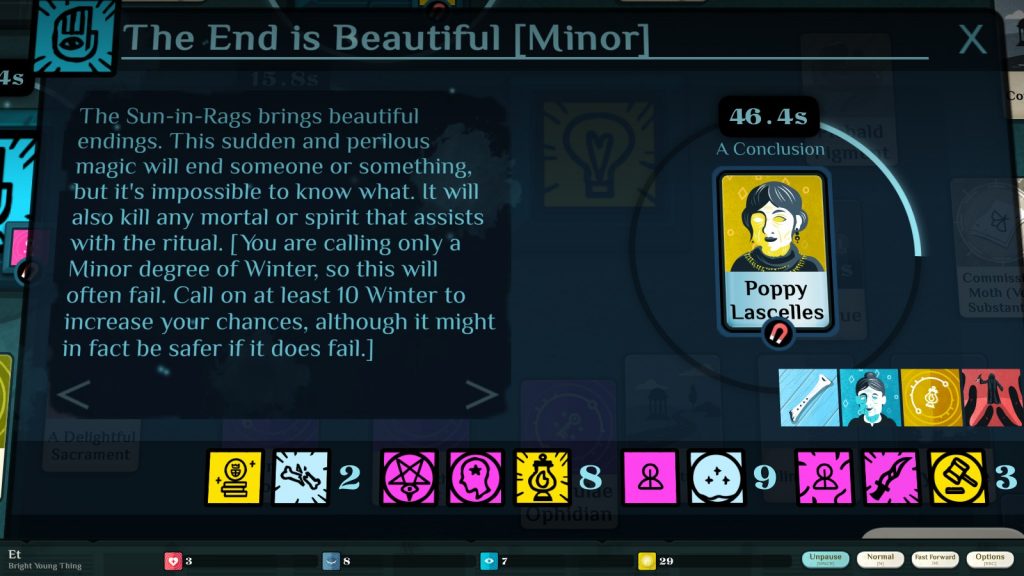 The writing is excellent, and I mainly chose this screenshot for the folks who already bought the game. Some amusing… Poetic… Justice.

The Mad Welshman loves new aspirants. It’s such a delight to discover how well each goes with Garlic Butter.