Source: Own cashmoneys
Price: £4.24
Where To Get It: Steam, Developer’s Site

I knew, when I heard the gloating words of Lord Herx, that I was going to die. It was the second dungeon level, and he was sending a minotaur? I didn’t have much time, so I… 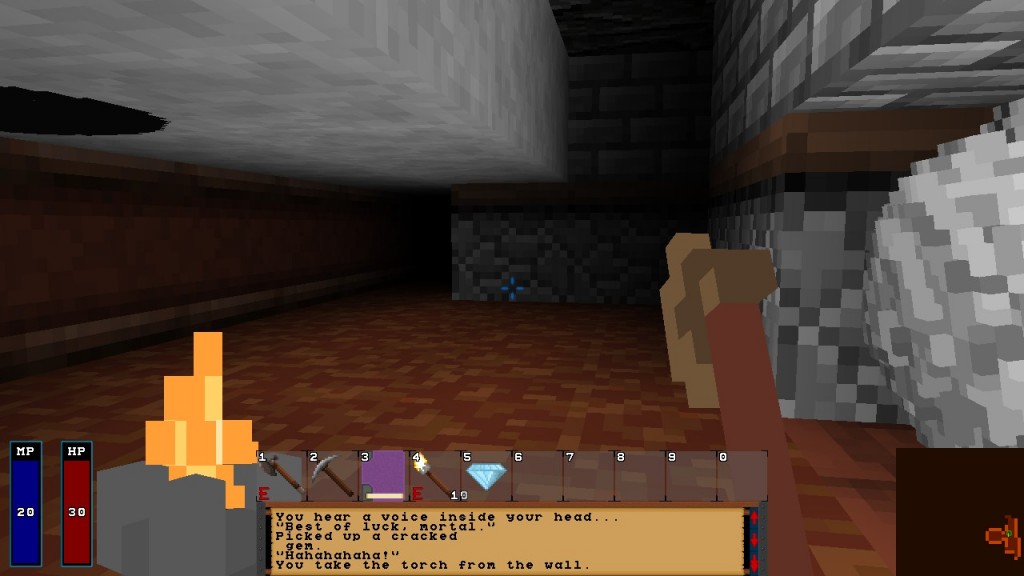 There are times when you celebrate someone for trying, for experimenting. Barony, by Turning Wheel LLC, is not one of those times. I’d just like to quote the Steam summary of this game for a moment:

“Barony is a 3D, first-person roguelike that brings back the cryptic and intricate designs of classic roguelikes such as Nethack and melds them with RPGs like Ultima Underworld, System Shock, and Daggerfall. Challenge is the calling card of this hard-boiled dungeon-crawler.”

This is what we in the industry like to call “an overly ambitious description.” Also one that is wrong. What Barony actually is is a real-time first person roguelike using Minecraft style graphics that owes a little to Nethack, but hasn’t really learned what a good Roguelike is about. For example, for all that Roguelikes are about challenge, they are not, for the most part, about dicking you over. That segment I wrote at the top? Is a thing that is entirely likely to happen. The minotaur is big. He has oodles of hitpoints. And, if he is the “insane event” of the second level (Because hey, the game promises “insane events one could expect to find in games like Nethack”), there is very little you can do to stop it. There’s a chance you’ll find the imaginatively titled ZAP Brigade (Lightning staff wielding nutters who love to hunt Minotaurs), or the stairs out of the level, but, just as likely, you’ll note the event is coming, try and find the exit for a minute or two, then get squished in one or two attacks by a Minotaur that, if you’re “indoors”, will clip through the ceiling. 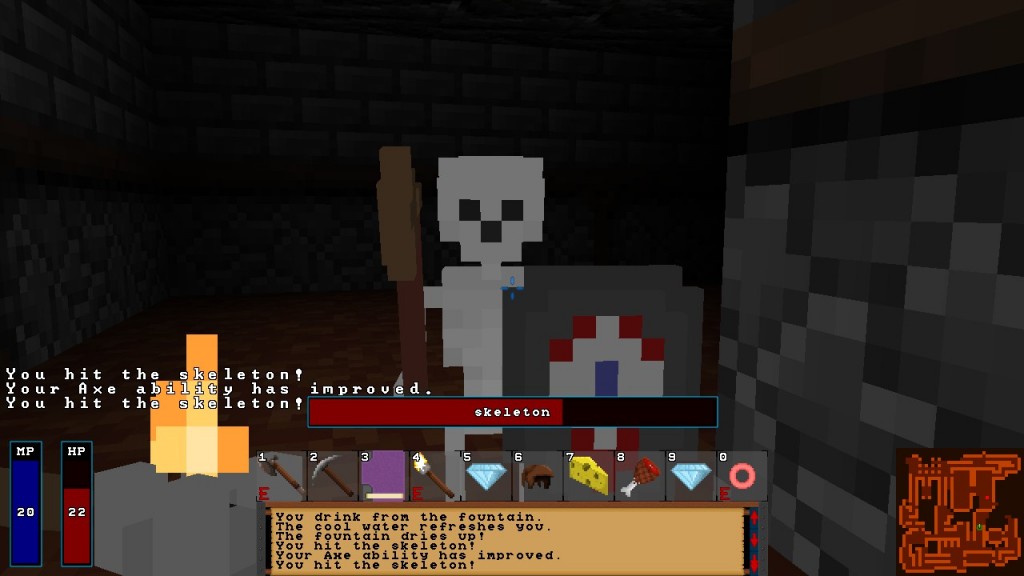 Combat involves smacking things and hoping they don’t die first, or being a Wizard who has mana and winning. Shields are nigh useless.

…Or you could just hit enter, and type “/killmonsters”, hitting enter again at the right moment. Won’t get you any XP, but it’s clearly documented in the README (The only documentation for this game that I could find, apart from a new and largely incomplete Wikia), so why not use it, eh? These two things alone will give you some idea of the implementation of the grand vision described in the game’s Steam summary. Think I’m being unfair? Then pay the £5 for the game, open up the game’s directory, then go to the “books” subfolder, and read “The Lusty Goblin”, which I can only imagine to be a pastiche of the “Lusty Argonian Maid.” It’s easy to do, as, presumably to allow easy modding for the IP based multiplayer shenanigans, the 31 books of the game are all in .TXT format.

Character generation, similarly, is disappointing. Ten classes, two genders, and five skins that are all white human beings (presumably it’s to do with hair colour), and the classes are not amazingly balanced. The Merchant, for example, starts with weak weaponry and bad HP, but, and this is an important but, can quickly and efficiently identify nearly every item dropped on the first and second floors. The only one I’ve found trouble with? Glass Gems (Which are worthless.) By contrast, the warrior starts strong, but will quickly find himself in a world of death and pain if he encounters, say, a poisonous spider (Spawns on the second level.) The Wizard can cast Force Bolt to his heart’s content, murdering quite a few enemies quickly and efficiently, but Light will drain his mana more rapidly than you’d like. 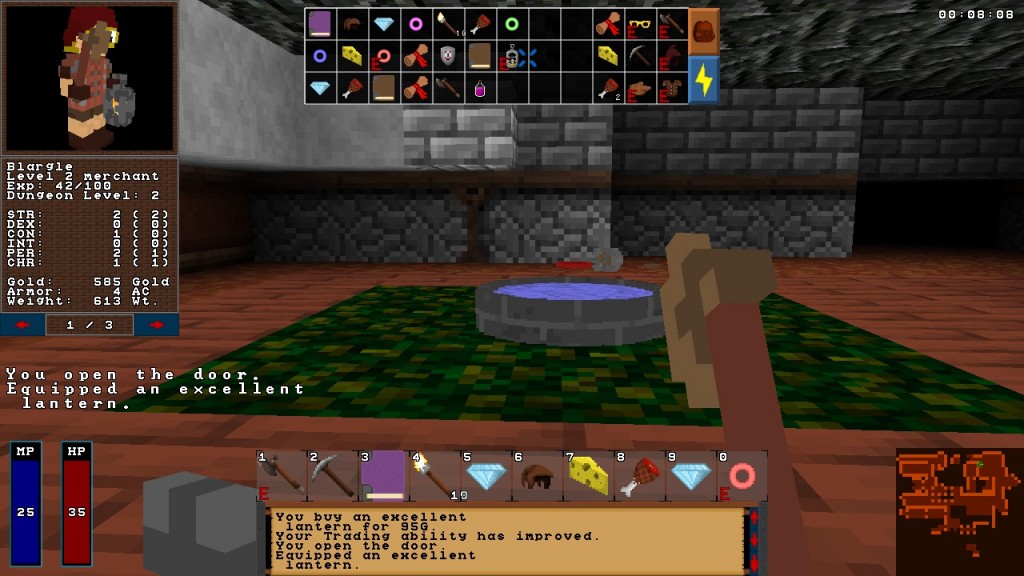 60% of this was gotten on the first level. 90% of it was identified without the use of scrolls. Merchants are great, in some respects…

In short, the game’s description is constantly reminding me of better games, and sometimes, the game itself is reminding me of better games. The graphics are voxel based, so, if you’re like me, you immediately think “I could be playing Minecraft right about now. Or maybe even Vox. Yeah, Vox sounds like a plan.” When you find that Lusty Goblin Maid book, you think “I could be playing Morrowind.” There’s enough replayability in this game for £5, but that same £5 could, by contrast, get me a better game. One which documents itself, tutorialises well, and doesn’t have a random event on the second floor that will most likely kill you, or rolling boulder traps, that, more often than not, you don’t even realise you’d triggered until it’s rolled past behind you. 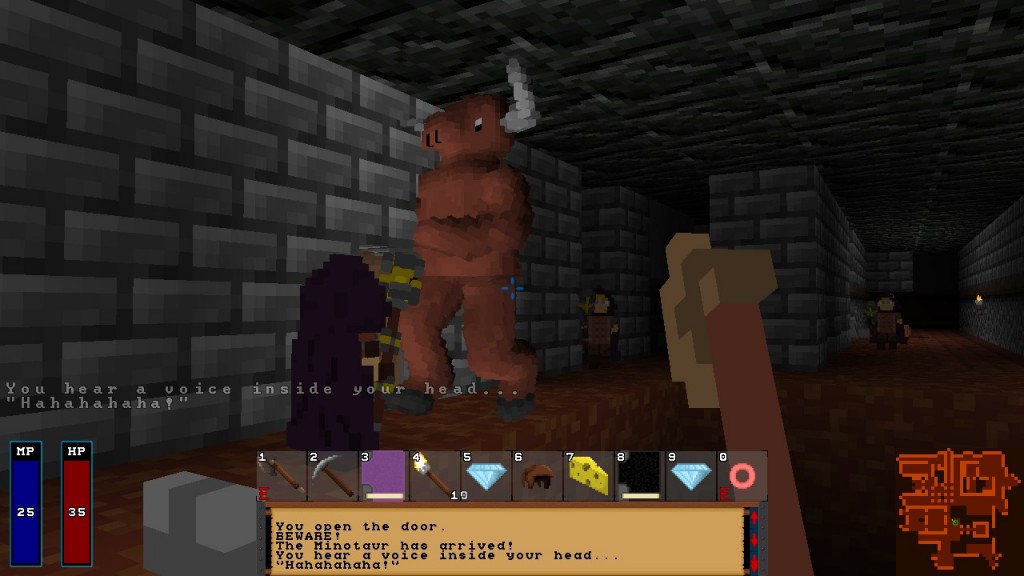 This is the Minotaur. Very often, he’ll spawn on the second level. The ZAP Brigade did way more than I did.

The Mad Welshman sighed as another boulder trap rolled merrily along behind him. The town of Hamlet remained unsaved, and Baron Herx’s Devil’s Dungeon remained closed.